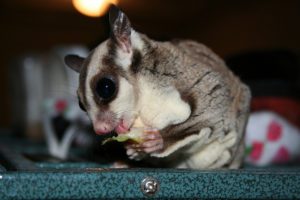 Sugar Gliders are minute, fascinating animals that are getting a lot of attention from exotic pet owners, despite the controversy regarding their status as pets.

If you go online and search for sugar gliders, you’ll most likely find a some funny YouTube videos of these marsupials gliding in a house, eating candy, and just being plain awesome.

Although it seems like they adapt pretty well to human homes, this is only common with few of them, since they’re very delicate animals that don’t fit will into our societies or groups.

In this article, we’ll show you some of the reasons why having a sugar glider as a pet is not such a great idea. In the case you do decide to keep one as a pet we’ll also provide you with some brief guidelines of what to expect.

What You Should Know About Sugar Gliders

Sugar Gliders, or Sugar Bears, are marsupials common to Australia and Indonesia.

They can live up to 12 years, and gather in large colonies of 30 or more in arboreal environments like jungles and rainforests.

They’re nocturnal creatures and highly sociable, making them very active, spending most of their time awake playing with their kin and gathering food.

The natural diet of sugar gliders is very diverse – depending on where they live and the season. They mostly eat insects, fruits, seeds, and tree sap.

Sugar gliders are very delicate due to their small and fragile  build, even small accidents can lead to severe injuries for these little guys.

Moreover, sudden and extreme changes to their natural diets often lead to obesity and sickness.

The thing that most owners find unattractive about sugar gliders is how noisy they are. The communitate by screeching and making low barking noises, and if you keep more than one glider, you could find the noise intolerable.

As you can imagine, the natural habitat of sugar gliders is quite hard to replicate at home. You need tons of big trees and ample perches.

It’s also recommended to keep a small group of sugar gliders as they prefer company, with ample access food to keep them healthy and happy… All this makes them high maintenance pets.

Moreover, most local veterinarians don’t know how to tend these exotic animals, making them hard to treat in case of illness or an emergency.

Must have if you have a Sugar Glider 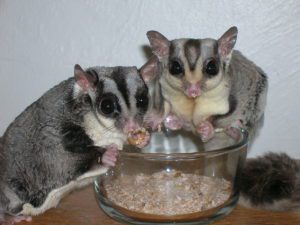 Sugar gliders are highly sociable creatures that require plenty of care. Buying a single sugar glider to keep as a pet will cause plenty of harm to the animal as they need the solid affection from their species.

They can bond with their human owners and become very lovable pets, seeking your attention and cuddling with you whenever they have a chance, but it will never replace their need to have a partner of their same species.

A single sugar glider is prone to making a huge mess around the house, scratching on surfaces and attempting to escape.

If you’re going to get a sugar glider as a pet make sure to have at least two of them to keep each other company and minimise the harm caused  by taking them out of their colonies.

They’re currently illegal to keep as pets or breed in Australia, Indonesia, and some states of the USA.

Currently, they’re not an endangered species, but due to the high numbers of sugar gliders being taken out of their environments for sale, the legality of keeping them could change in the near future. As always, check with local authorities before making a purchase.

The critical controversy of keeping sugar gliders, and most exotic animals, is that we force these animals to adapt to new environments, in places that don’t fulfill their natural needs and hope they become similar to other pets like cats and dogs.

You should know that household pets like cats and dogs went through a process of breeding and domestication over hundreds or thousands of years, until they finally adapted to humans and learned how to live happily as domestic animals.

Should You Have a Pet Sugar Glider?

Besides the controversy of keeping exotic pets, sugar gliders are high maintenance and delicate animals that require plenty of attention and knowledge.

You’ll have to make a serious and long-term commitment to keep them healthy and happy. You’ll need to make plenty of changes dramatic changes in your home to create a welcoming habitat where they can safely live, and adapt to their nocturnal routine to feed them and give them all the attention they need.

Whether they make good or, bad pets will depend on what you want from the pet. If you’re looking for an exotic animal to replace your cat or a dog, then you’ll feel overwhelmed by the needs of a sugar glider and the vast difference in care.

However, if you’re an experienced pet owner that sees sugar gliders a a potential and exciting partner, then you’ll see they’re great companions.

As always, if you’re looking to keep any exotic pet make sure you research the animal, its needs, and the changes you’ll have to do to your home to keep the animal healthy before deciding on buying an exotic animal. You can find a lot of that information here on GeoZoo.

What do you think? Do you have a sugar glider or know someone who does? Disagree? Let us know in the comments.

Summary
Article Name
Why Are Sugar Gliders Such Controversial Pets?
Description
Sugar Gliders are minute, fascinating animals that are getting a lot of attention from exotic pet owners, despite the controversy regarding their status as pets
Author
GeoZoo
Publisher Name
GeoZoo

The Pros and Cons of Having a Pet Alligator

Analysis: Do You Really Need An Exotic Pet?

Do Anteaters Make Good Pets?!? Find Out If An Anteater is Right For You!

The Rarest Dog Breeds on the Planet

How to Care for a Guinea Pig: A Comprehensive Guide on Improving Your Pet’s...

Are My Dogs Gums Healthy? What to Look for and How to Check

The Best Dog Toys With Squeakers

We provide you with the latest breaking news, analysis, how-to guides, shopping comparisons, products reviews and videos straight from the world of pets.
Contact us: info@geozoo.org

Are You Being a Good Boy? Pet Cameras: Top Benefits and...

How to Care for a Guinea Pig: A Comprehensive Guide on...

© GeoZoo.org
As an Amazon Associate I earn from qualifying purchases. Learn more on ourDisclosurepage.

Find out more or adjust your settings.

This website uses cookies so that we can provide you with the best user experience possible. Cookie information is stored in your browser and performs functions such as recognising you when you return to our website and helping our team to understand which sections of the website you find most interesting and useful.

Strictly Necessary Cookie should be enabled at all times so that we can save your preferences for cookie settings.

If you disable this cookie, we will not be able to save your preferences. This means that every time you visit this website you will need to enable or disable cookies again.